Since 2018, we have manufactured more than 1,000 sections for both onshore and offshore towers for the principal clients in the market. 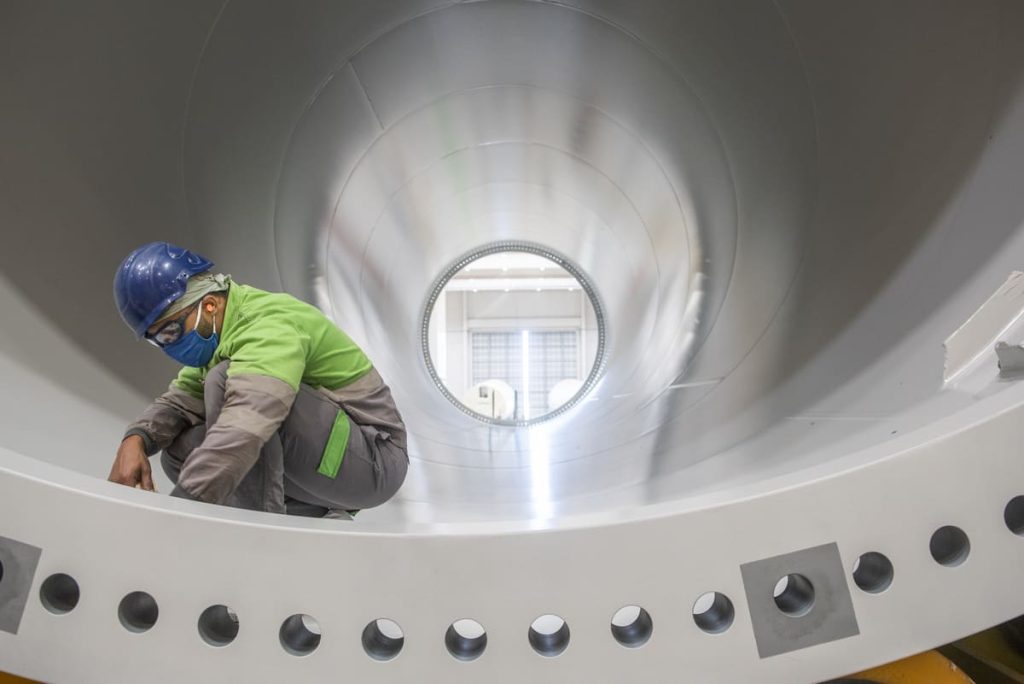 Founded in 2018 in the Port of Bilbao, Haizea Bilbao is a company dealing in the manufacture and assembly of large metal structures for offshore wind turbines, such as wind towers, monopile foundations or primary steel for transition pieces. 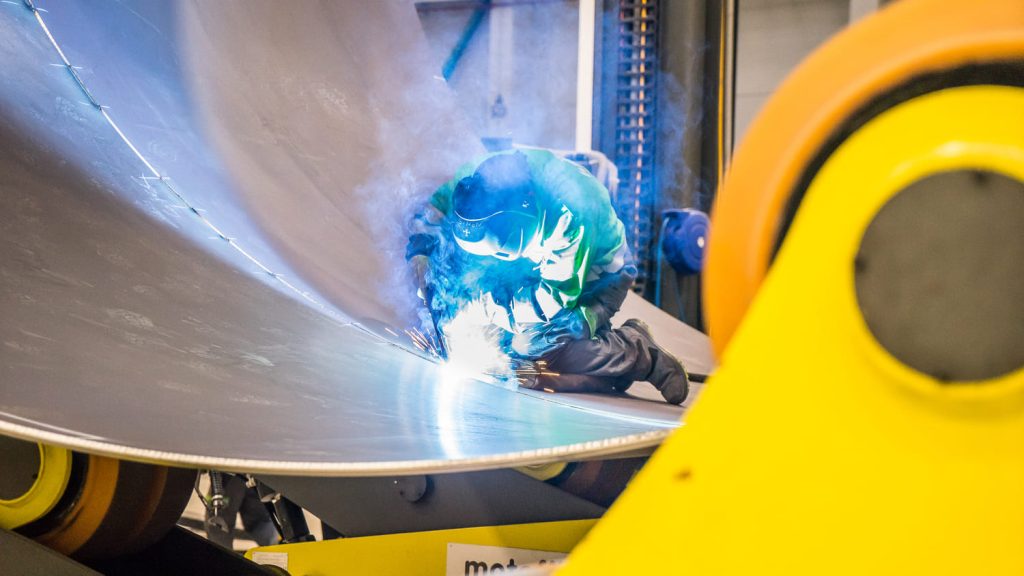 Since 2018, we have manufactured more than 1,000 sections for both onshore and offshore towers for the principal clients in the market.

Our production process covers all the steps required for the manufacture of tower sections, starting with the processing of the steel in the service centre, including its bending, welding, surface treatment, installation of internal components, preparation for transport, and storage. 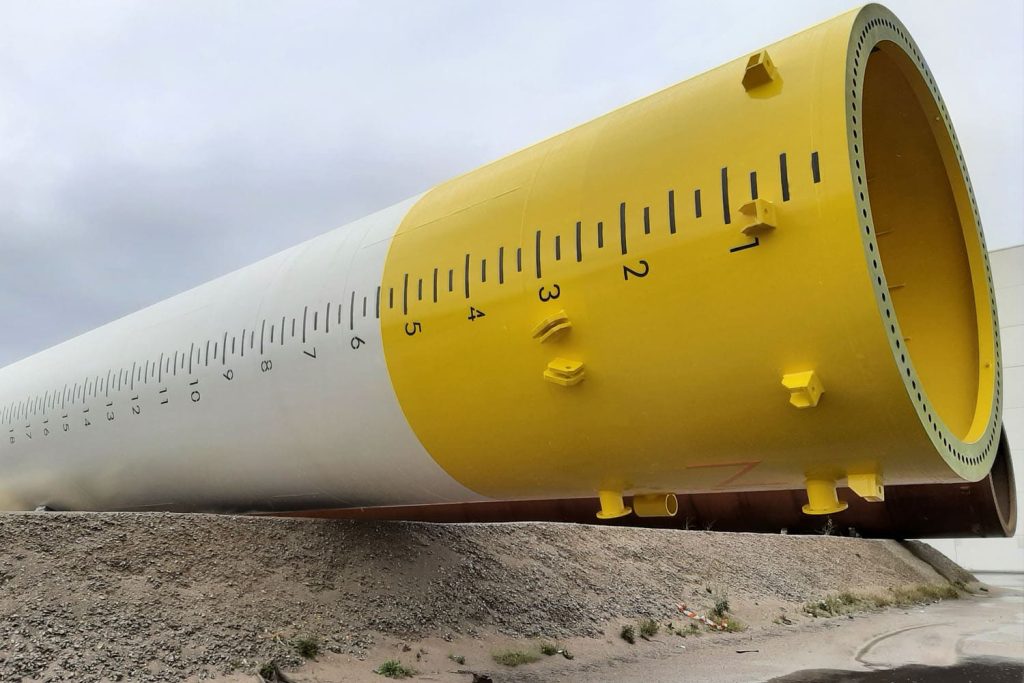 At our facilities, we manufacture large diameter tubular foundations, such as monopile foundations, primary steel for transition pieces, pin piles for jacket-type foundations, or components for floating structures.

Monopiles are the type of foundations most commonly used in offshore wind farms, and is the option chosen for around 80% of existing installations. This involves a steel pile that is driven into the seabed, and its current limit for use is set at a depth of 60 m below water.

The transition pieces (TPs) are a tubular steel structure that connects the Monopile or Jacket with the wind turbine tower. Haizea Wind has the necessary capacity and experience to manufacture transition pieces for Jacket or Monopile-type foundations. 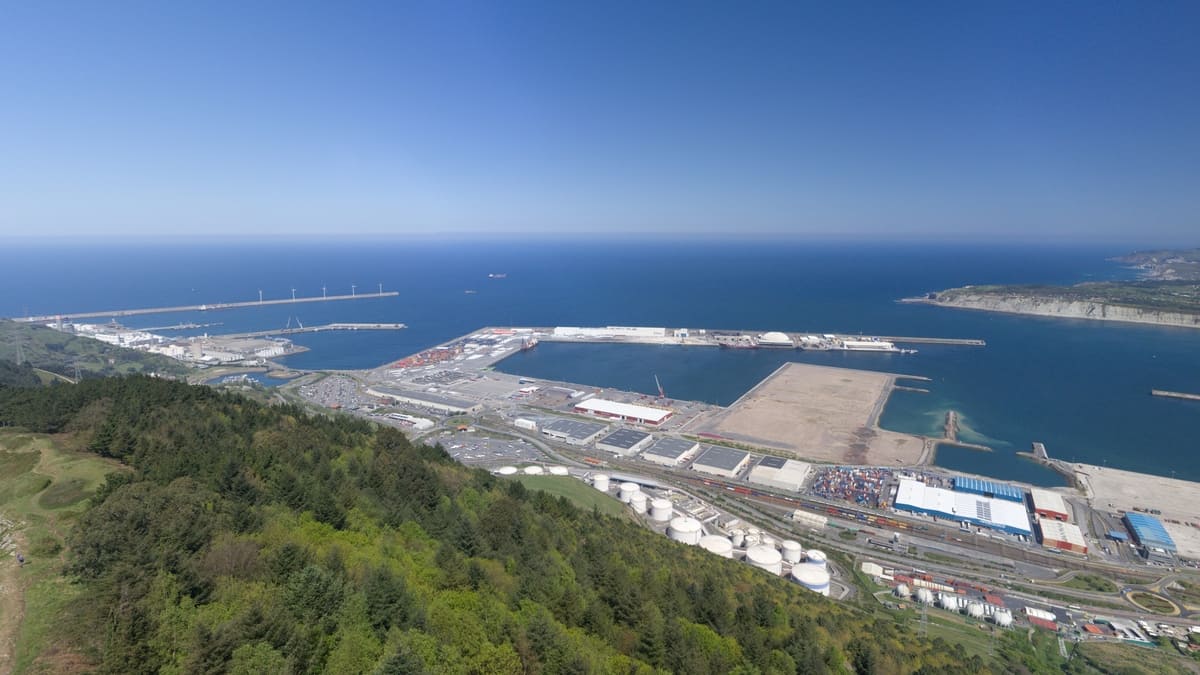 The Haizea Bilbao facilities are located in the Port of Bilbao, with direct, preferential access to a berthing line measuring 800m in length and 21m in draught, allowing for optimised logistics for both the entry and exit of materials, and eliminating any dimensional restrictions involving products or the ships to be berthed.

The factory was designed to cover the current and future size of offshore components, with diameters of up to 11m. In addition, the layout of the plant is designed to ensure productive efficiency, and is  the largest capacity factory in Europe.

Haizea Wind Group consists of Haizea Bilbao, Haizea Tecnoaranda, Haizea Grupo WEC, Haizea Sica, and Haizea Breizh. In February 2018, the joint venture between Haizea Wind Group and SICA Metalúrgica was formalised, with Haizea Sica, a company located in Santa Fe, Argentina, dealing in the manufacture of onshore towers. In May of that same year, the Haizea Bilbao plant (formerly known as Haizea Wind), responsible for producing onshore and offshore towers, transition pieces and monopiles, opened in the Port of Bilbao.

In December 2018, Grupo WEC was acquired, a company with almost 20 years of experience specialising in the casting, machining and surface treatment of components for wind turbines, such as hubs, shafts and frames.

Tecnoaranda was acquired in November 2019, adding know-how from this company with extensive experience in the manufacture of onshore towers.

Haizea Brest, a company established to support the local market in France, was founded in the second half of 2021.

Haizea Wind Group is currently experiencing significant growth. It is the largest supplier of offshore towers in southern Europe. The group plans to further increase its geographical presence in other regions, such as the UK and Eastern Europe. It also plans to continue developing other components, including monopile foundations.

Since the company was created, we have had the opportunity to supply our products to many projects developed by different customers, such as Vestas, GE Renewable Energy, Siemens Gamesa Renewable Energy, Nordex-Acciona, Saipem and Renexia, among others.

We use suppliers that are committed and in line with our strategy, and that work with the highest standards in quality, service, competitiveness, innovation and agility, all in strict